I took a trip to AMAZE in Berlin last week, which was a phenomenal experience. I'd recommend the event for anyone who wants to explore unusual and thought-provoking games and listen to speakers that reach beyond our usual definitions of games and play.

It was also a fantastic opportunity to demo my brand new game, Codex Bash, for the wireless button kit I've been developing. Codex Bash was playable on Thursday as part of the Open Screens section of the exhibition. I also set it up again on Saturday in the courtyard of the venue for everyone who'd missed it first time around - after all it was a sunny day and a good excuse to try a new setting!

Photos and details about the game are below the join!


Codex Bash is played using four coloured button units which connect to a computer by bluetooth. The buttons can be placed anywhere in a venue, and being wireless I can set them up in all kinds of environments in imaginative configurations. As well as games exhibitions I want to run this at public festivals, schools, pubs and even gyms. I even plan to take it out into the woods and tie them to trees!


With each completed round the way to work out which symbol matches which colour - the Codex of the title - gets more complex. So as players get more tired out from running around they also have more mental juggling to do!

In the current build there's a few different codexes - some of them are based on information on the screen, and some of them use objects in the real world. For example, one round involves players looking through a book of schematics, and another involves them having to hold down buttons on the keyboard to reveal the mapping.

The biggest surprise for me was seeing just how well it worked as a cooperative game. While I'd intended it for solo play I'd fully expected players would cooperate if they could. Spectators would naturally join in by shouting the solutions at the player. I even provided players with a whiteboard and pen so they could take notes if it helped them. The joy of my competitive multiplayer games always came from players finding their own unique approaches, so I like the idea of letting players do absolutely whatever they like in order to solve the problem - and that includes getting more people involved!
The kinds of communication I was able to see was fascinating. Players naturally found ways to organise themselves even if they didn't have any prior knowledge of what puzzles they'd have to solve. In fact, it was this sense of solving some unknown problem against the clock that clearly made it so appealing, and gave it the feel of being on a TV gameshow.

Some teams would have one "alpha player" telling the others what to do. If the alpha player got a colour wrong the team would often reorganise themselves to compensate, depending on the personalities of the players. Some non-alpha players would press a button without saying anything and the rest of the group would become confused about where they were in the sequence. Teams would need to learn to communicate as a unit, and often created a shared vocabulary to keep things efficient.
Other teams seemed to gather around the screen between each round, work together to understand how the codex worked, and then divide themselves up based on who'd worked out the puzzle, who had the longest limbs and who was least tired-out.

The complexity of the team-based interactions was beautiful, and far more exciting to watch than I'd anticipated. It certainly informs the direction of the game as I grow it, and I'm glad I decided to demo it publicly even at this early stage of development. Team-based play is clearly central to the magic of the experience, and I may have missed that without bringing it here! 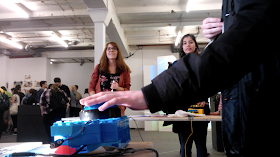 Lots of players likened Codex Bash to gameshows such as The Crystal Maze, The Krypton Factor and Fun House. When I was a kid I dreamed of being on these shows, so if building games like this allows me to bring this experience to a wider audience I'll be a very happy developer!

The next public appearance of Codex Bash will be at Indievelopment in Utrecht on Friday 15th May. I look forward to updating you on how the game has grown since!